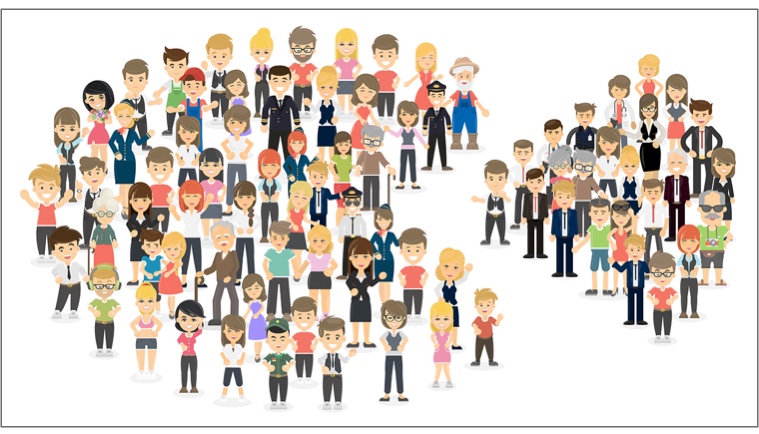 I think we marketers tend to lump everyone into the same bucket, from the Baby Boomers to the Gen X’ers, to the Gen Y, and Gen Z populations. But is that the best way for us to market our products? And, do our products appeal to all of those age groups?

Market segmentation is very important when deciding what marketing strategy we design. It’s not a one-size-fits-all approach. It’s not about changing the copy slightly to suit each demographics’ needs. It’s also using the proper delivery platforms, as well. And … it might also include redesigning your products to appeal to various generations.

We need to stop just harping on features and benefits and advantages, which is how I was taught decades ago. I’m not saying we shouldn’t still think in those terms. However, trying to mass market in today’s diverse generational differences, can make life very difficult for today’s marketing professionals who are trying to get good results from their marketing campaigns. Upper management is always looking for better and better lead generation, sales, and engagement rates. So, it is important to understand how to market to the various demographics in your customer database, especially if you are in an industry that has customers in all four of those segments.

A Brief Overview of the Four Generations

Most demographers agree that the Baby Boom generation was born from about 1946 up to 1964, so that makes them in the age range from 56 to about 74 years of age as of the writing of this article. With the baby boomers continuing to work up to or past age 70, the likelihood of your company marketing to this market segment is pretty good. You’ll probably find that most of these individuals are in upper management or C-suite level. But, they could make up anywhere from 5-10% of your customer base.

During the baby boom years, the US was recovering from the economic hardships of World War II. The Baby Boom generation is so-called due to the spike of the birth rate during these years. They experienced an unprecedented level of prosperity throughout their lifetime. They are sometimes called the affluent generation. Many baby boomers are now in their retirement years; however, the individuals born in the middle or at the end of the baby boom era are still in the workforce.

This generation is sometimes called “The Ignored Generation”. Historical events such as The Vietnam War, the fall of the Berlin wall and the end of the Cold War helped shape their cultural upbringing. They are more open to diversity and seem to embrace religious, sexual, class, and racial differences. Most demographers agree that those born between 1965 and 1982 can be considered Generation X’ers, so that makes the majority of these individuals in the age range of 38 to 55.

According to a survey conducted by Northwestern Mutual Life Insurance Co., about 40% of the Gen X generation does not feel financially secure. They feel they need to accumulate at least $1 million to generate an income of $40,000 per year as seniors. Faith Popcorn, a trend consultant, says, “Generation X’ers are the forgotten middle child generation. They are worried about both the present and the future. They understand, more than Millennials that robots could replace them and the younger ones in this demographic don’t think they’ll ever be able to afford to have kids or will be able to qualify for a mortgage. Only one-third of Gen X’ers think they are special compared to 6 in 10 of the Baby Boomers and Millennials.

Also known as Millennials, this group has been shaped by the technological revolution during their youth. Mobile phones, laptops, and tablets help them to be connected. They have a view of work-life balance more than their parents in the Baby Boom generation who worked long hours at stressful corporate jobs. Most demographers agree they were born between 1983 and 2000, so that makes them somewhere between 20 years of age and 37 years of age. Most of them are either starting to work fresh out of high school or they are just finishing up college. The older Millennials are established in their careers and may even be married with children. Many of the Baby Boomers could be managing or supervising a team of Millenials.

Similar to the Millennials, these kids have grown up on technology. But, even more so than the Millennials since the invention of the smartphone, tablets, and wireless technology. Gen Z’ers are between the age of newborn to about 20 years of age, basically from the year 2000 to the present. So most of them are most likely still in school and haven’t started their life as an adult yet. They are very influenced by “influencers” on social media but they like to visit new platforms like Tik Tok or Instagram. They often shop online, as well.

* Please note that some demographers disagree with these dates. According to a Pew Research survey, they peg Gen Y at around 1981 through 1996 and Gen Z between 1997 and 2012. So, there are a few disputes as to the actual starting and endpoints to these demographic categories.

Each demographic group learns, researches, and shops differently. Gen Z, for example, follows influencers. Baby Boomers may read reviews and Gen X’ers may be somewhat skeptical and need to learn more about the product. So, why do so many marketers lump Gen Z and Gen Y, in particular into the same group, creating one campaign to reach both audiences? After all, they are both considered young adults, you may think. But even with just a few years’ difference, the technology has changed, they have been raised differently, and they are led by different value propositions.

Pamela Bump recently wrote an article on the HubSpot blog about this very subject. She was quite surprised by the results of a Lucid poll where it was asked if the same marketing tactics work on Gen Y and Gen Z. Over 50% of the respondents said yes. However, almost 50% disagreed, as well. So, there was almost an even split depending upon who answered the survey.

She found six factors that differentiate Millennials and Gen Z’ers:

Morning Consult just put out an Influencer Report on Engaging Gen Z and Millennials. You can get a free copy of the report if you want to dive into each demographics’ viewpoint. Gen Z’ers are highly influenced by celebrities and influencers on social media. That means whether they think these top influencers are deemed favorable or unfavorable. Many of these two demographic categories would like to have the status of “influencer” so many of them are willing to review a product on social media channels. Fifty-eight percent of Millennials say the major reason they want to be an influencer on social media is money; whereas, 58% of Gen Z’ers say they want to make a difference in the world. Gen Z’ers and the younger Millennials are definitely into their causes.

The Moral of the Story

I could go on ad nauseam about the differences between the various generational demographic groups, but I think you get my drift. It is important no matter which demographic you are targeting to segment and learn what motivates them to buy, which is why creating a buyer persona is so critical for today’s marketing professional. The bottom line is, a one-size-fits-all approach (or as we used to call it “mass marketing”) does not work anymore, especially if your customer base crosses over multiple age groups.

To your marketing success,

P.S. Did you enjoy reading the above article? Please share your thoughts in the comments section below! And if you liked this article, please share it with your colleagues on your social media sites. Simply click the share buttons at the top of this blog article.